Reading and Writing tapes does not require a special utility in and of itself. Audacity, Goldwave, or any other audio recording software will work, because tapes are, in fact, just audio. There is a page devoted to how to read TRS-80 tapes into WAV format here.

Repair WAV’s and Convert Between MANY File Formats 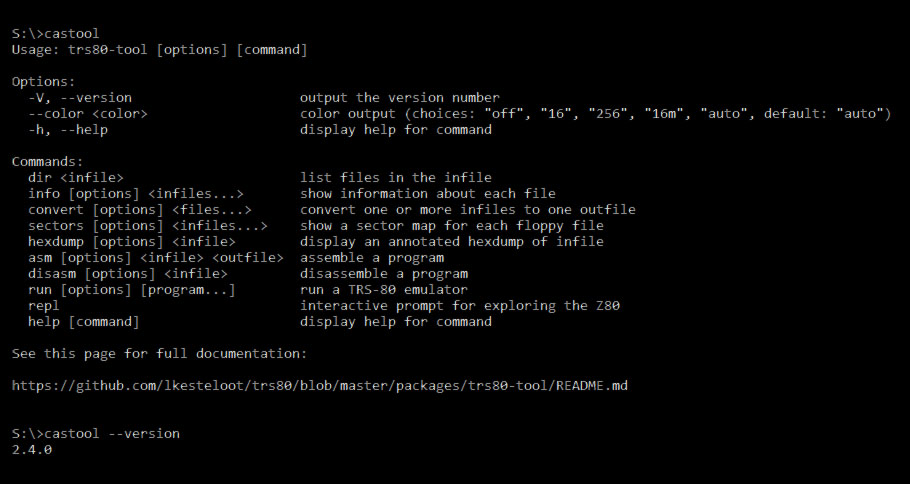 TRS80-TOOL is accessible both as a web site and a stand-alone command line utility. 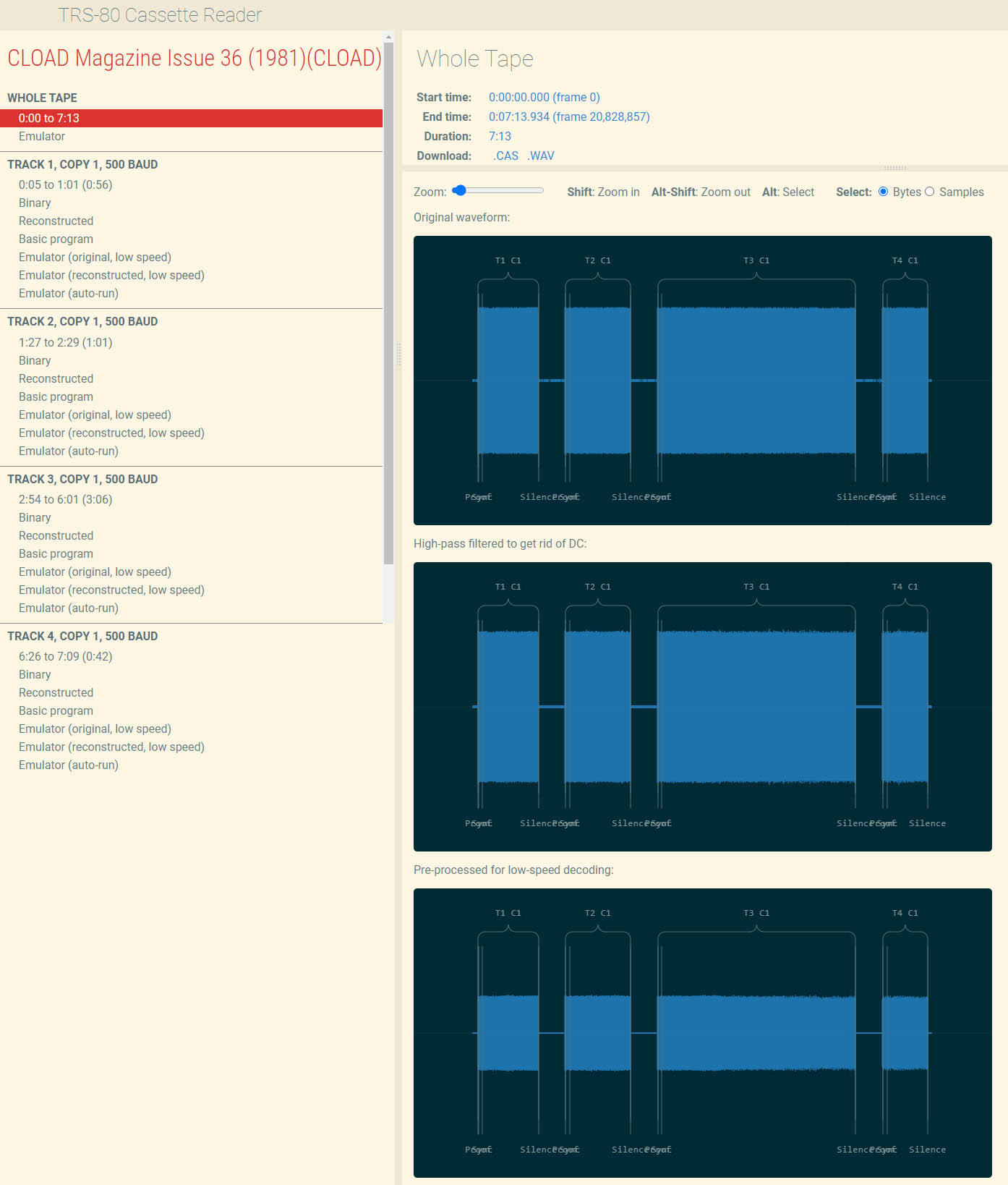 This utility is in the form of an extremely powerful web page.

The web page can be found at https://www.my-trs-80.com/cassette/. You can drag and drop a WAV, CAS, or BAS file and from there see the individual pulses of the WAV (original and filtered). You can click on the BASIC or Machine Language output listing and see the individual clock pulses in the WAV which gave rise to whatever you are pointing to. You can run the program in a virtual emulator in the browser. And, of course, you can export the corrected WAV to WAV, BAS, Binary, or CAS.

The standalone can be found on https://github.com/lkesteloot/trs80/tree/master/packages/trs80-tool. v2.4 can be downloaded there or right here for Windows/MacOS/Linux.

Command line options are as follows:

--version
Show the tool’s version number
--help
Show the usage message
dir
Show the contents of WAV, CAS, JV1, JV3, DMK, and SCP files
info
Displays a one-line description of the contents of the file, such as its type (system program, Basic program); if known, the embedded filename; and the starting address (or its best guess for one) for SYSTEM tapes.
hexdump
Displays a hex dump of the input file, with annotations. By default the command will collapse consecutive identical lines (turn off with –no-collapse. Then –color flag will force coloring on or off.
sectors
Displays a table of the sectors in a floppy disk. The columns are the sectors and the rows are the tracks. For each sector a character is displayed. The –contents flag will show the contents of each sector.
repl
Start an interactive session for exploring the Z80. You can type an assembly language instruction (such as “ld a,5”) to assemble it, write it to memory, explain it, execute it, and show its effects on flags and registers. This virtual machine is not in a TRS-80 context (it has no ROM or peripherals).
asm
Assembles the specified assembly language source code.
trs80-tool asm program.asm program.cmd
Assembles program.asm into program.cmd. Output can be .CMD, .3BN, .CAS, or .WAV
trs80-tool asm ‑‑baud 1500 program.asm program.cas
Assembles program.asm into a 1500 baud CAS file.
trs80-tool asm ‑‑listing program.lst program.asm program.cmd
Assembles program.asm into a program.cmd with a listing file of program.lst.
disasm
Disassembles the specified program.
trs80-tool disasm saucer.cmd
Disassembles saucer.cmd
trs80-tool disasm ‑‑org 0x8000 saucer.cmd
Disassembles saucer.cmd with an ORG of 8000H
run
Run a TRS-80 emulator in the shell.
trs80-tool run ‑‑model 1 ‑‑level 1
Starts a Model I Level 1 Emulator. Choices are Model I, III, and 4, Level 1 and Level II.
trs80-tool run tdos13a.dsk
Runs an emulator and boots tdos13a.dsk
convert
Converts a list of input files to an output file or directory

The convert option is quite powerful and has three arguments of its own: –baud, –entry, and –start. Here are SOME examples that would follow trs80-tool convert on the command line, which should give you a pretty good idea of what you can accomplish: 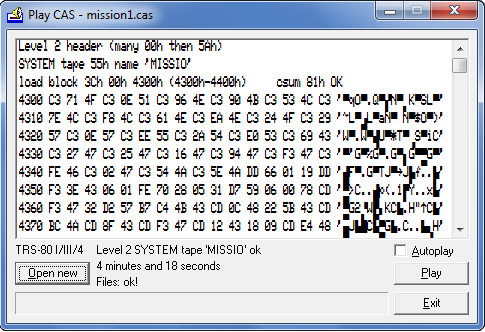 Use your PC as a cassette player for your TRS-80 Model I/III/4 Level I and II by connecting your TRS-80 cassette input (“Ear” Output) into the PC’s headphones output. 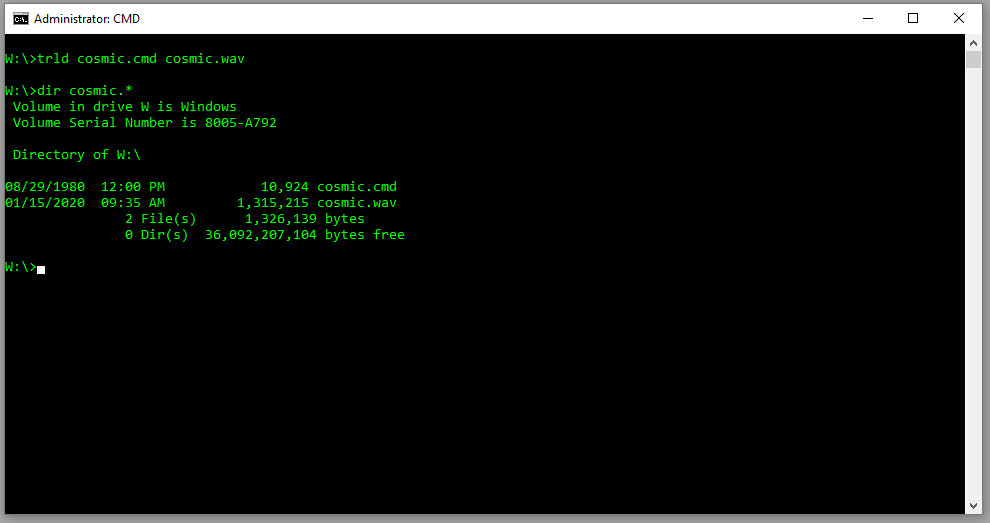 One additional feature, the “-s” option, detects relocation code and cassette loaders, runs them and puts the resuls into the output file. For example, many disk executables (.cmd) start with a short block of code that copies the entire program to a different spot in memory and jumps to it. Similarly, a few games had their own custom cassette loaders. The first program on the cassette was a short loader program that would load the rest of the tape in some custom format.

Everything below this line, while fine programs, have functionality which is included in the above programs. 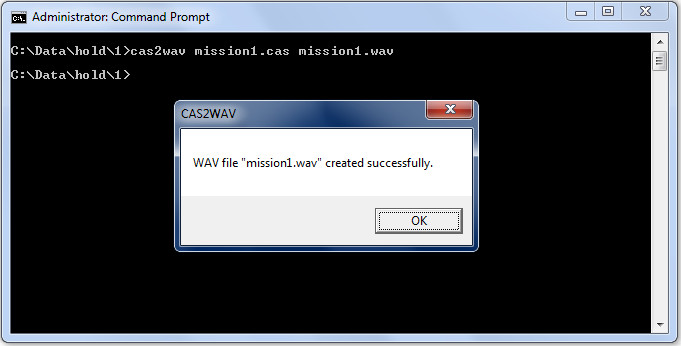 Convert a CAS file into a WAV for making a real TRS-80 cassette. 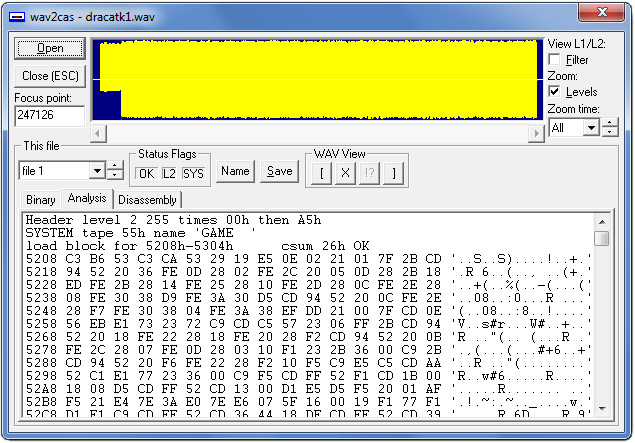 Wav2cas is a Windows program, run in a DOS window (or you can use drag’n’drop, dropping the wav file onto the wav2cas desktop shortcut icon), which takes an uncompressed Windows wav file (made from a Model I Level II (500 Baud), Model I Level 1 (250 baud), or Model III (1500 Baud) cassette tapes) and generates a cas file for use by TRS-80 emulators. Silent bits doesn’t matter, so an entire tape can be converted (but header synchronization is only done once, so this is risky). 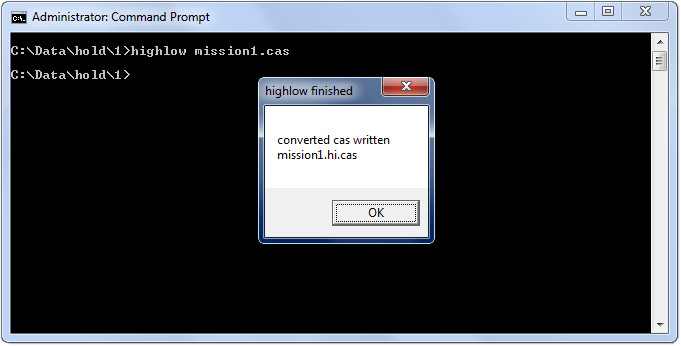 Highlow is a small utility for converting CAS files between Highspeed (1500 Baud) and Lowspeed (500 Baud). Since 1500 Baud includes a startbit, making the file contents unreadbale, it is useful for viewing the contents of a highspeed CAS file after a wav2cas_h conversion, to do a preliminary check for success or to get the name from a system tape. It can convert both ways and does so automatically. It can’t handle multiple files in a CAS file so only single content CAS files may be used, and it must detect the header so it can’t deal with fragments. 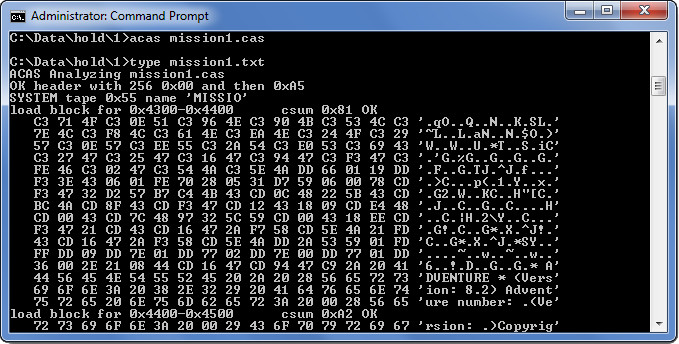 ACAS is another small utility, this time for checking the cas files. Actually it is a beta as it will be incorporated in another program but I decided that I would release this standalone version anyway. As it is now it will scan through a cas file and find out what it can about it and output what it thinks to a txt file with the same path and name.

ACAS will read model I and III type of CAS files, it will attempt to decode the first program it finds, if there are data after what it perceives as a program these will be listed as hexcodes. For highspeed it will check that the startbit is ok. It does SYSTEM tapes, reporting the blocks, does the checksum, looks for gaps. It does BASIC, listing the program detokenizing all except what is in quotes or behind a REM, checks the embedded addresses, reports any codes in quotes or behind REM.

Cass80 is a tool by J�rgen Buchm�ller to load, analyze, disassemble or list, modify, and save EACA Colour-Genie 2000 and Video-Genie 3003 (which was a TRS-80 clone) cassette images. Cass80 can be downloaded from https://github.com/pullmoll/cass80. 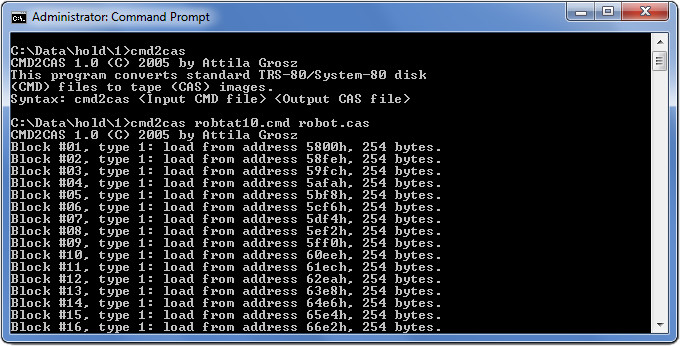 Convert a /CMD file into a WAV for making a real TRS-80 cassette.