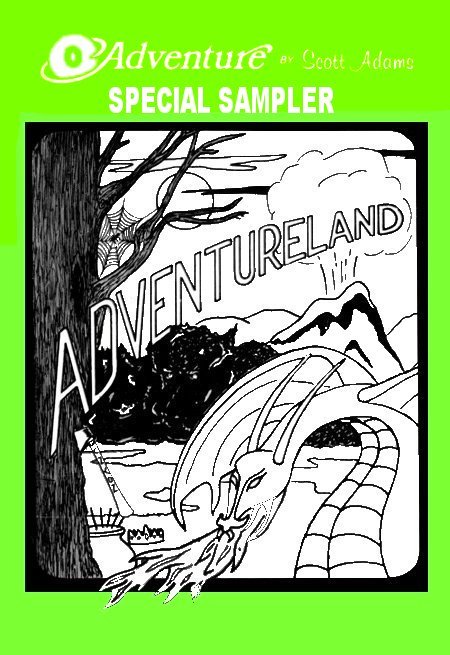 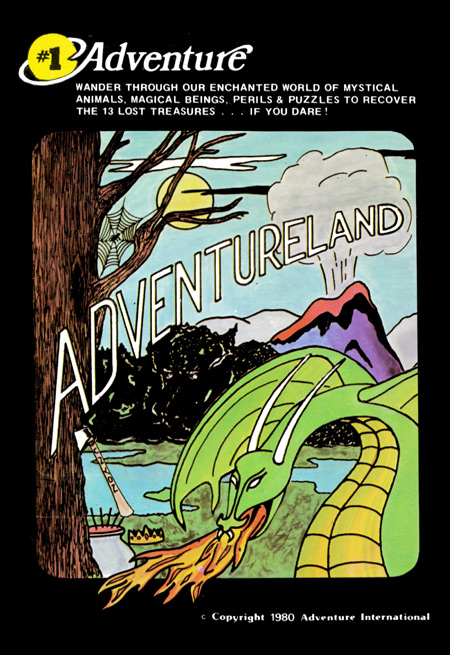 You wander through an enchanted world trying to recover the 13 lost treasures. You’ll encounter wild animals, magical beings, and many other perils and puzzles. Can you rescue the Blue Ox from the quicksand? Or find your way out of the mazes and pits? Happy Adventuring…..
2
Pirate Adventure
$19.95
010‑0002
1979
Here
Here 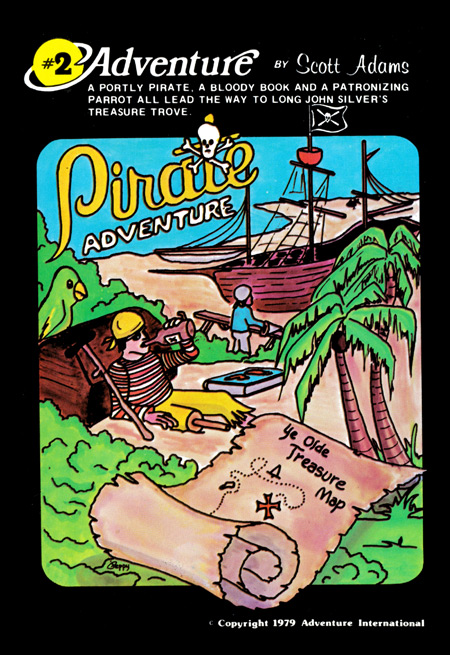 Yo ho ho and a bottle of rum… You’ll meet up with the pirate and his daffy bird along with many strange sights as you attempt to go from your London flat to Treasure Island. Can you recover Long John Silver’s lost treasures? Happy sailing, matey… Recommended for the novice with built in help.
3
Mission Impossible
Adventure
$19.95
010‑0003
1979
Here
Here 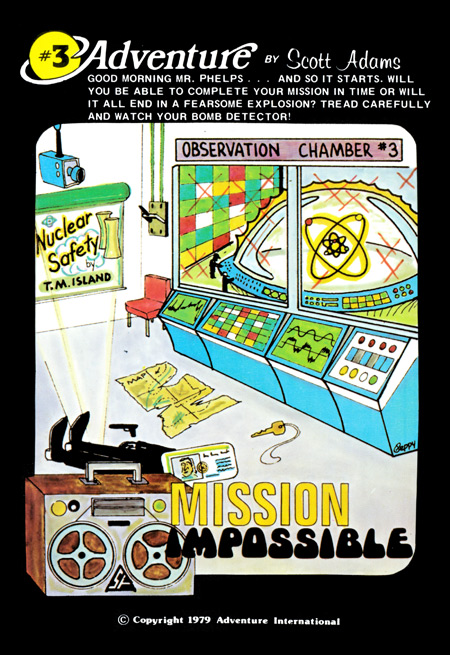 Good morning, your mission is to… and so it starts. Will you be able to complete your mission on time? Or is the world’s first automated nuclear reactor doomed? This one’s well named. It’s hard, there is no magic, but plenty of suspense. GOOD LUCK…..
4
Voodoo Castle
Adventure
$19.95
010‑0004
1980
Here
Here 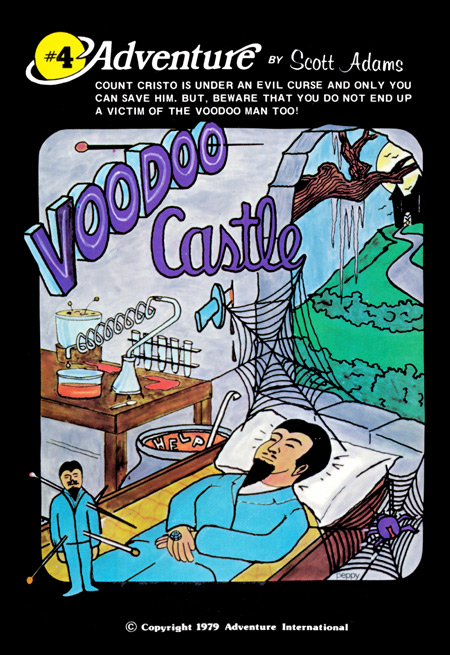 Count Cristo has had a fiendish curse put on him by his enemies. There he lies with you his only hope. Will you be able to rescue him or is he forever doomed? Beware of the Voodoo man…
5
The Count
Adventure
$19.95
010‑0005
1981
Here
Here 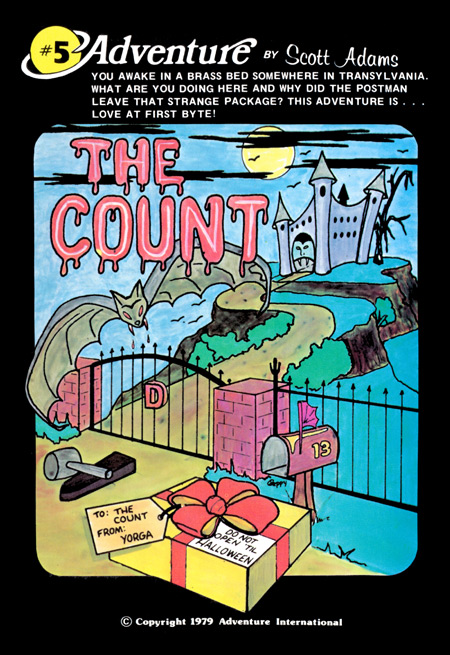 You wake up in a large brass bed in a castle somewhere in Transylvania. Who are you, what are you doing here, and why did the postman deliver a bottle of blood? You’ll love this advanture, in fact, you might say it’s Love at First Byte…
6
Strange Odyssey
Adventure
$19.95
010‑0006
1981
Here
Here 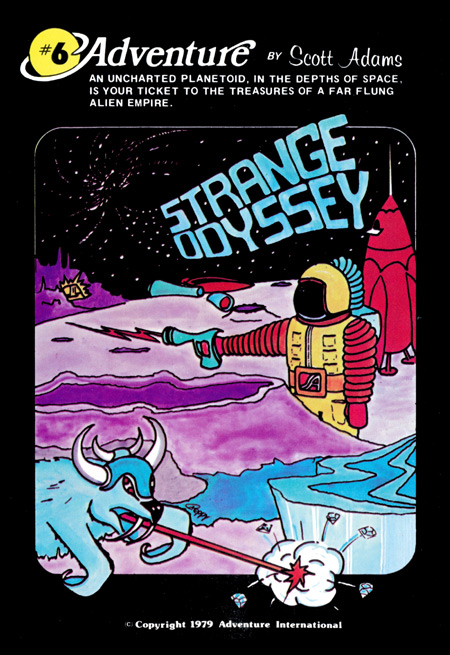 Marooned at the edge of the galaxy, you’ve stumbled on the ruins of an ancient alien civilzation complete with fabulos treasures and unearthly technologies. Can you collect the treasures and return or will you end up marooned forever?…
7
Mystery Fun
House Adventure
$19.95
010‑0007
1981
Here
Here 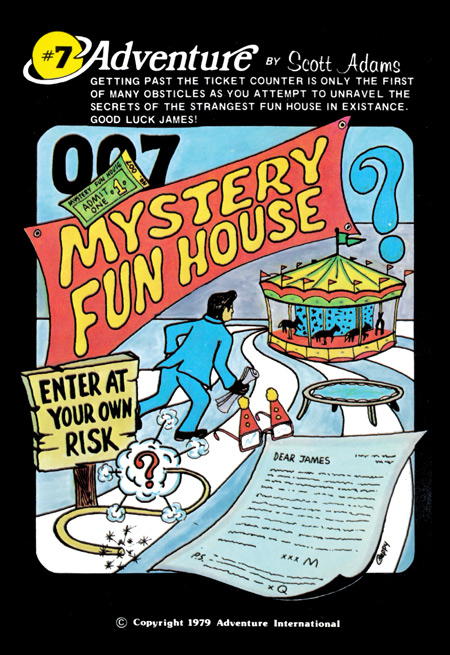 Can you find your way completely through the strangest fun house in existance, or will you always be kick out when the park closes?…..
8
Pyramid of
Doom Adventure
$19.95
010‑0008
1981
Here
Here 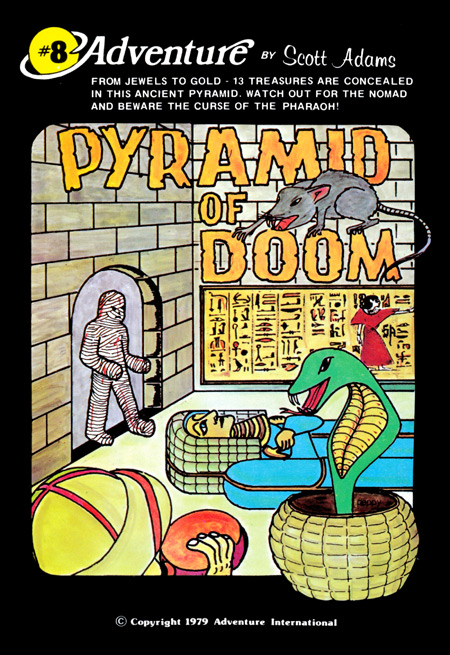 An Egyptian Treasure Hunt leads you into the dark recesses of a recently uncovered Pyramid. Will you recover all the treasures or more likely will you join its denizens for that long eternal sleep?….
9
Ghost Town
Adventure
$19.95
010‑0009
1981
Here
Here 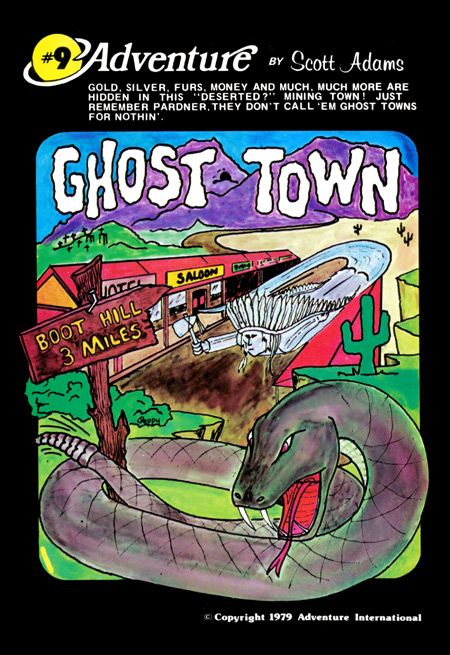 Explore a deserted western mining town in search of 13 treasures. From rattlesnakes to runaway horses, this Adventure’s got them all! Just remember, Pardner, they don’t call them Ghost Towns for nothing’. (Also includes new bonus scoring system!)
10
Savage Island
(Part 1) Adventure
$19.95
010‑0010
1982
Here
Here 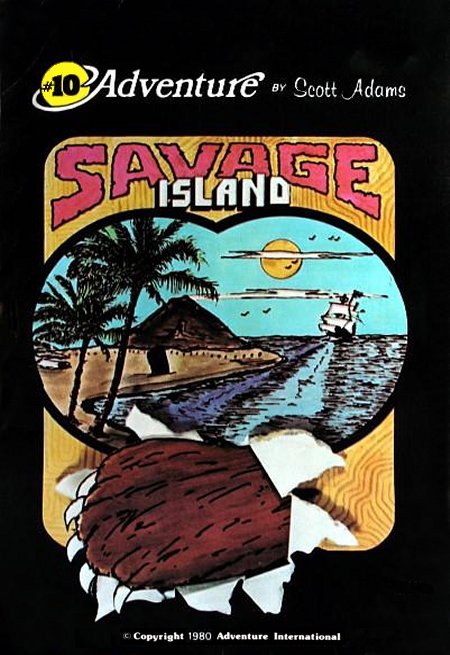 WARNING FOR EXPERIENCED ADVENTURERS ONLY!!!! A small island in a remote ocean holds an awesome secret. Will you be the first to uncover it?

Note: This is the first of a multi-part adventure;, it will be necessary to purchase additional packages to complete the entire adventure.
11
Savage Island (Part 2) Adventure
$19.95
010‑0011
1982
Here
Here 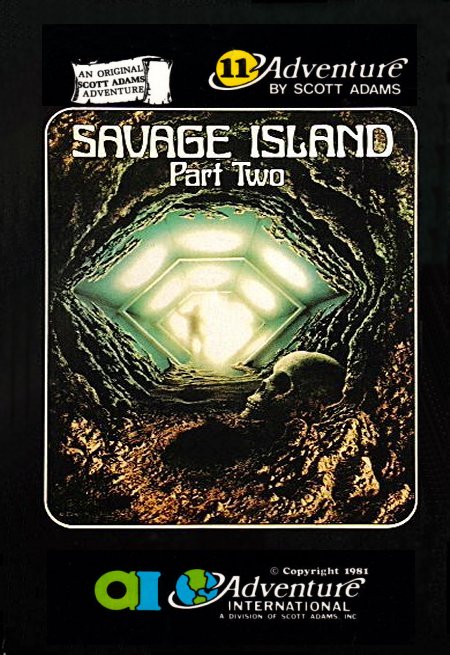 After struggling through Part 1, you have the consolation of knowing its half over. This concludes this 2 part Adventure it requires you completed #10 and received the password to start #11.
12
Golden Voyage
Adventure
$19.95
010‑0012
19xx
Here
Here 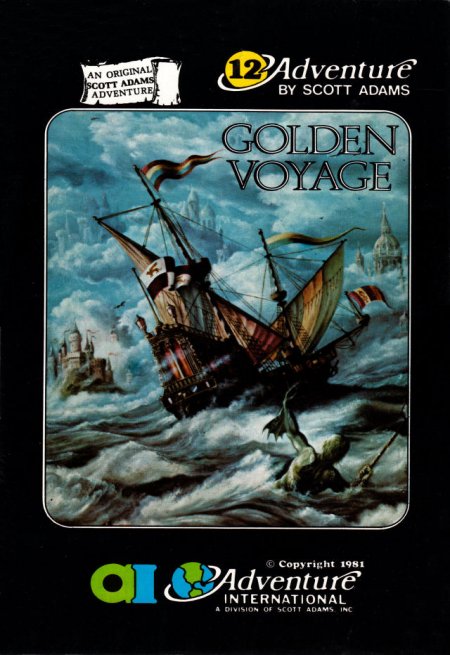 The King lies near death in the royal palace – you have only three days to bring back the elixer needed to rejuvenate him. Journey through the lands of magic fountains, sacred temples, stormy seas, and gold, gold, gold! Can you find the elixer in time?
13
Sorcerer of Claymorgue Castle Adventure
$29.95
1984
Here
No 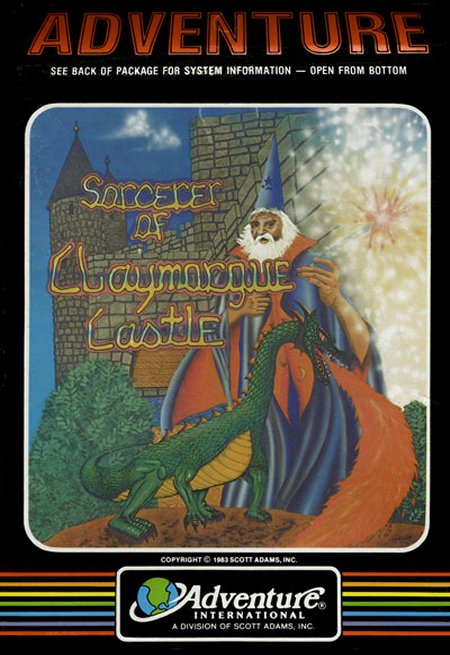 Long ago, in times passed beyond remembrance, Solon the Master Wizard and wearer of the Secret Cloak lost the 13 Stars of Power. The grasping Vileroth believed the Stars to be the only source of Solon’s expert wizardry. But, unbeknownst to Vileroth, it was the Secret Cloak that controlled the Stars and protected the wearer from their awesome powers. Unable to master the Stars, Vileroth was undone.

In his final days, as Vileroth’s strength slipped from him, he concealed the 13 Stars of Power within the Castle of Claymorgue, determined that no one save he should possess them. Solon, learning of Vileroth’s destruction, despatches his faithful young apprentice Beanwick to retrieve the Stars.

“Tread carefully, O Beanwick! Would that I could assume this quest myself, but alas, I can only send with you these few spells. Claymorgue Castle harbors further spells, but beware — one unskilled in the arts cannot predict their outcome.”
14
Return to Pirate’s Island Adventure
1983
Here
No 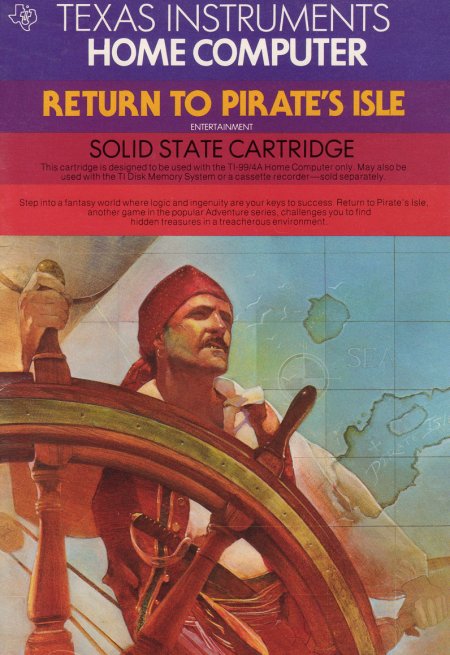 This game is as tricky and devious as the mind of Scott Adams gets. A treasure hunt in the same vein as its predecessor, it incorporates some of the more interesting effects Scott achieved using his system. Knowledge of “Pirate Adventure” is essential.
41
Buckaroo Bonzai Adventure
1985
Here
No 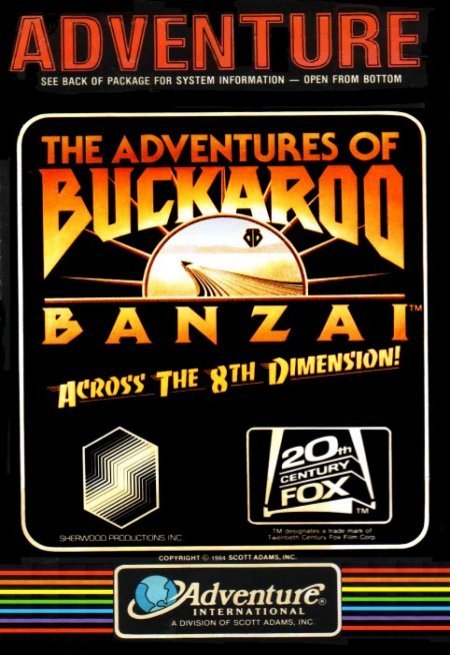 Buckaroo Banzai, a neurosurgeon, rock star and more, must try to fix a jet car that can drive him into the 8th dimension.
51
Questprobe I: Hulk
1984
Here
No 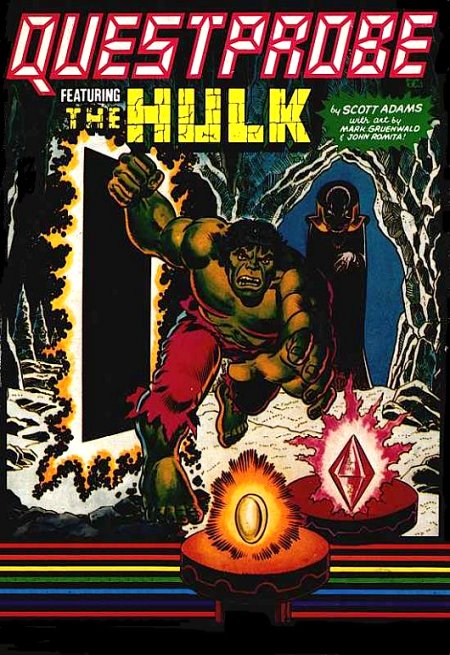 The Hulk gets taken to a surreal otherworld for his testing by the Chief Examiner, and must find a way to survive in this alien environment while collecting a number of Gems.
52
Questprobe II: Spiderman
1984
Here
No 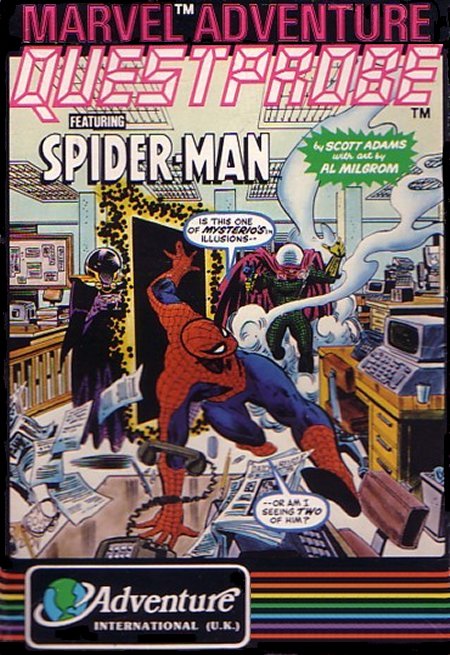 It’s the amazing Spiderman’s turn to be tested by the mysterious Chief Examiner. The offices of the Bugle have been taken over by some of Spidey’s most famous adversaries, and it’s up to him to get the presses rolling again.
53
Questprobe III: Fantastic Four
Here
No

54
X-Men
No
No
I do not have this program, so I cannot do a walk though; I am advised that Adventure International went backrupt while it was being developed, and it was never released.

The Scott Adams original text Adventure games are still copyrighted by Scott Adams and are not Public Domain. They may be freely downloaded and enjoyed though. Please see Scott’s web site for his new game Return To Pirate’s Island 2.
Homepage: http://www.msadams.com/index.htm.
Email: msadams@msadams.com.
December 12, 2000
Box images used with permission of Stefan Meier of the Interactive Fiction Archives