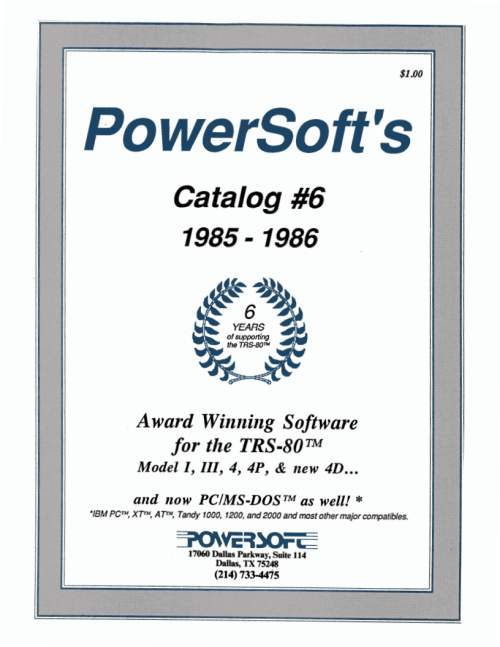 Quentin Barnes was kind enough to write a utility I had been seeking for quite some time, to be used in conjunction with reading DMK’s (such as on a Cateasel).

Called DMKBSC, the utility runs under LINUX and under MSDOS (just like CW2DMK), and will parse a DMK and advise as to which specific sectors which are bad, if any.

For those who read floppy disks into DMK format, this utility, in conjunction with SuperUtility or other disk mapping software, can tell you what file resided on a bad sector, so you can know what data, if any, was actually lost.

Update: George Philips was kind enough to compile for Windows x64, so for those that would like that version it can be found, packaged with the MSDOS and LINUX binaries, here.

Jürgen Büssert continues his development of the BOOTSTRAP utility, which now permits people without boot diskettes to create them from a cassette based Model I, III, or 4 system. His page can be found here as can v7.6 of his software.

He has also expanded the cassette player abilities to a mobile phone, so those with a mobile phone and an appropriate TRS-80 DIN plug can make boot disks by playing the BOOTSTRAP input files on a mobile phone. Details on this can be found here.

The international version of TRSDOS v1.3 for the Model III reports two previously unknown ‘valid’ CRC’s for ROM C: 3BE7 and 10A6. If anyone out there has a ROM C with those CRC’s a dump (which can be accomplished with a BASIC program) would be greatly appreciated!

Patrick of Texas Tandy Restorations has posted two YouTube videos on how to paint a Model III.

You can watch on the TRS-80 Trash Talk channel: https://www.youtube.com/channel/UCXkGugvdCkpkMDylVQb9gfg.

If you want to participate in the live zoom session, reach out to trs80trashtalk at gmail dot com for information.

While I have NO connection to this at all, just wanted to let whoever might be interested know about an estate sale in San Diego which seems to show a Model 4, among other things.

You can watch on the TRS-80 Trash Talk channel: https://www.youtube.com/channel/UCXkGugvdCkpkMDylVQb9gfg.

If you want to participate in the live zoom session, reach out to trs80trashtalk at gmail dot com for information.